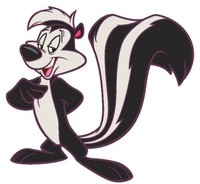 One night a few months after we moved into our place in Portland we noticed a bit of a skunk smell. It wasn't too strong, and we just assumed there was a skunk in the woods and something had scared it. It didn't take too long for the smell to go away, and we didn't think about it again. A few weeks later we took a vacation and had a relative stay in our house while we were gone. She told us that a few nights after we left there was a REALLY strong skunk odor in the house suddenly, and it was enough to stink up the whole place. She said she opened all the windows and it took another day or two before the smell was gone. At the same time our beagle had gone a little crazy and was trying to dig through the floor in our bathroom.

Within a few days of our return we got a whiff of skunk again, and the beagle was doing her best to get under the house through the bathroom floor. We calmed her down, and eventually went to bed. Around 2am we heard some scratching and rustling sounds coming from an air conditioning duct in the floor of our room. The beagle leaped off the bed and started frantically scratching at the vent. Eventually the noises stopped, the dog calmed down, and we went back to sleep. At this point I was still trying to convince myself it might not be a skunk...

The noises continued a few days later, and by then I was sure we had a problem. Looking everywhere around the exterior of the house I found the only place they could have been getting in. Under the deck at the front door it looked like something had dug a little hole to get under the deck, and from there they were getting under the house. I tried putting cinder blocks and river rocks where it looked like they were coming and going but they just dug new holes.

I searched around the 'net for suggestions on how to keep the skunks away. I still thought they were just visiting under our house for some reason (maybe we had tasty grubs or something), because I honestly did not want to believe there was a skunk trying to live under our house. Turns out they nest in big groups, as many as 14! Reading that had me really worried that maybe we had a dozen skunks living under the house. By now I was ready to seek a pro, and we found a guy who said he would come by and see if it was a job he was willing to do.

When Jeff came over I showed him where I thought they were coming and going, and he was pretty sure we had skunks. We agreed on a price (which was totally reasonable!) and he was hired. Turns out I was lucky and caught him on a good day; normally he turns down skunk removal jobs (same with "angry raccoon in my attic" jobs). I think it's a pretty sensible policy, I would do the same.

That day he left a trap by the deck baited with a granola bar. Before it even got dark, we had our first capture! Of a squirrel. When I opened the trap that thing shot out like a rocket. I reset the trap, put some new bait in and crossed my fingers.

Sure enough, by 10pm or so I noticed the trap was sprung and inside was an unhappy skunk. Surprisingly it hadn't sprayed or anything, so at least we did not have to deal with a stink like that. The next morning Jeff came to fetch the critter and left a new trap. He drove the skunk about 60 miles away and released it into the woods.

The next night we had a repeat, except whatever got trapped was making a whole lot more noise. Lots of scratching sounds and even sounds of the trap being moved around. From inside the house we shined a light on the trap and saw one big skunk in the trap plus one smaller adolescent skunk scratching all around the base of it trying to help free the captive one. Eventually the smaller one left, and the next day Jeff collected the trapped skunk and repeated the release process.

The third night we caught one more skunk, but caught no others for a few more nights. We actually might have caught four in total but I can't really remember for sure. 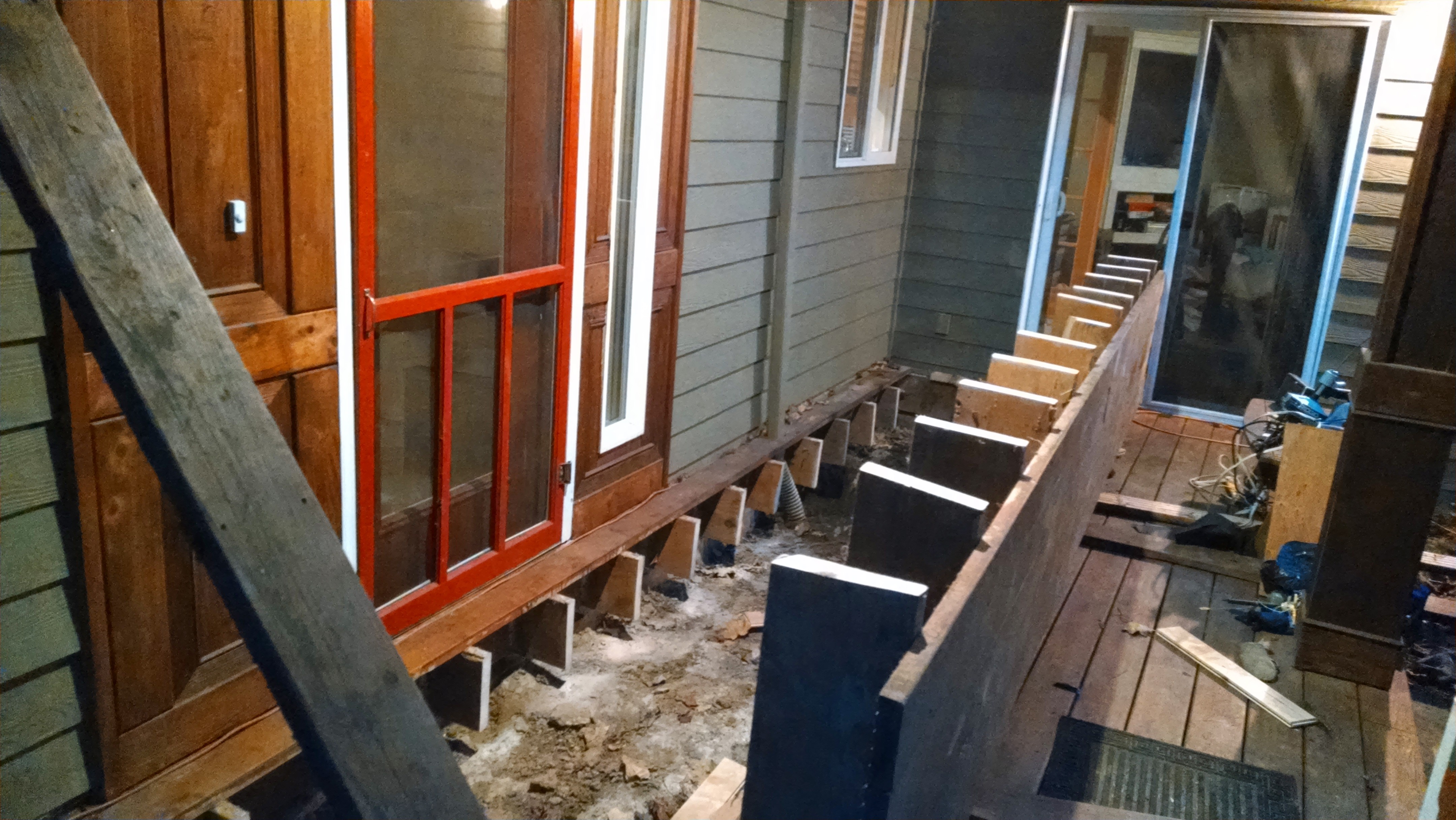 As soon as I thought the skunk situation was sorted out, I opened up the deck and filled in the gap the skunks were using. I used several cinder blocks plus two bags of cement to be sure they did not have another shot at it. 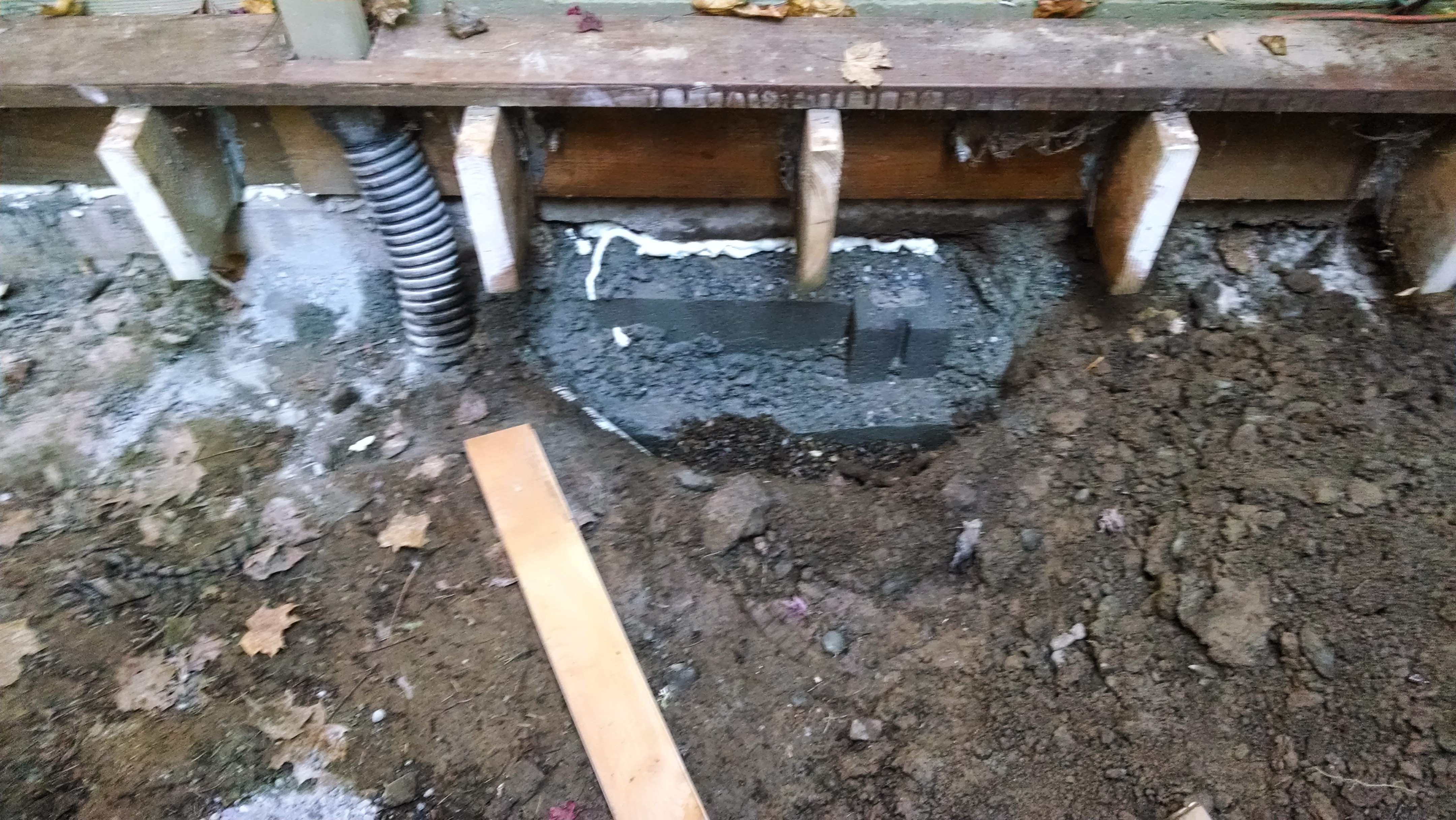 I also lined the perimeter of the deck with a thick layer of river rocks so any further attempts to get under there would be difficult and obvious. Since then, we haven't had a single problem with animals (unfriendly or otherwise) trying to nest under our house. Hopefully that never changes!