I'm sitting here on a plane headed home, finally, after what has been a pretty long week of travel for work. All of it has been good stuff, and even included the opportunity to share the stage with IBMs Chief Digital Officer Bob Lord. During his quarterly "all hands" town hall meeing, I was invited up to talk to him about what we are doing with respect to developer advocacy at IBM. It's pretty gratifying to be part of such a massive company but realize I still have a voice and am actually empowered to make changes. 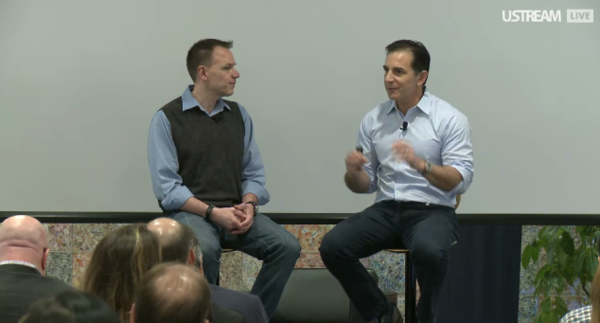 Anyway, on this plane right now it has occured to me that I do a pretty terrible job of mentioning when I'm going to be speaking somewhere, or doing something else really interesting relating to my job. So I'm going to do a better job at that starting now!

The first thing to share is that I get to do a keynote at OSCON 2017! True, it's a sponsored keynote, but it's kind of a neat deal. IBM has been sponsoring OSCON for a long time. As part of that sponsorship they get a 10 minute "sponsored" keynote slot. Previous talks have been met with mixed reactions, largely because they tend to be very product focused. As part of our work to improve the way the world of developers sees IBM, I have been given the opportunity to take that keynote slot this year. I'm super happy to have the chance, and I'm also really excited to talk about something that's got nothing to do with any IBM products. I think folks will enjoy it, and I really hope I get the chance to do more talks like it. I'm going to post something soon on the same topic I'll be speaking about, but here's the abstract if you didn't feel like following the link above:

Why choose open infrastructure? Open Source isn’t winning, it’s won. In the last decade, we’ve seen an incredible explosion in open source software. Massive projects have been developed in the open, on open operating systems, using open languages and compilers. But, Christopher Aedo asks, was all the infrastructure open as well?

Source code management, CI pipelines, chat services, and IaaS all have open alternatives, but the majority of projects are developed on closed and proprietary infrastructure. Christopher explains how to make open choices with greater community impact.

I also recently had a talk submission accepted at the OpenWest 2017 Conference. The topic of my talk is "Brewing Beer with Linux, Python and a RaspberryPi". It's a topic that is near and dear to my heart, and I'm really looking forward to taking the stage and sharing the cool stuff I've been using to make beer lately.

Hope to see you at OSCON and OpenWest!